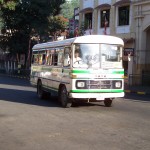 Sri Lankan buses can be quite scary and unpleasant at times. At other times they can be a lot of fun.

Whether you enjoy them or not, they are certainly useful and you’re bound to get on one at some point whilst volunteering in Sri Lanka. They go pretty much everywhere. They are usually frequent and are incredibly cheap, however, they do take much longer than you think, so be a bit careful when planning your journeys.

There are three types of bus you can jump on in Sri Lanka (and their qualities are quite varied):

These are red and tend to be quite old, dirty and falling apart.

These are usually white but often have murals or advertising on them. They travel the same routes as the government buses and are the same price.

These tend to be more like mini-buses with dark windows and curtains. They are air-conditioned. They don’t stop as often as the normal buses and so can be much faster over long distances. They are about twice the price of the normal buses. You usually can’t open the windows on the AC buses (for better or worse).

Getting On The Bus

Getting on the bus is often easier said than done.  It is much easier to attempt this at a terminus / bus station rather than at a road side or small village stop, but sometimes you have no choice.

You have to push. You will almost certainly be pushed. Sometimes you need to jump as the bus may not even stop completely, it may only slow down a bit.

Find a seat (if possible). The seats immediately behind the driver are reserved for clergy (generally Buddhist monks, but sometimes nuns, priests, ministers etc). So if you are in those seats and a member of the clergy gets on board you will have to move. If you are a woman, you may have to move even if the seat next to you is empty as some Buddhist monks aren’t permitted to sit next to a woman.

Seats near the door are easier to get out of if you are not going all the way to the end of the line. Otherwise, get up early to make your way to the door, it can take several minutes to get from the middle of a really crowded bus to the door.  This is all the more difficult if you have a bag with you!

The conductor will make his way round the bus and ask you where you are going. You may need to say this several times as sometimes they find it difficult to understand what you are saying, occasionally nearby passengers will help with your pronunciation.  If you’re having problems – get out your map.

Pay with exact change if you have it. If you need change the conductor will usually give it to you (if he has it and you’re using a suitably small note). Sometimes he will come back to you later in the trip and give you your change if he doesn’t have the exact money on him. This is more common on longer journeys and it’s certainly no cause for concern but make sure you remember to ask him for your change before you get off if he looks like he might forget.

Getting Off The Bus

There might be buttons on the ceiling, or a pull cord so that you can alert the driver that you want to get off at the next stop. Or catch the conductor’s attention and ask him.

If you don’t know where you are getting off, it is a good idea to ask a few people around you who will probably be only too happy to help.

On long journeys the bus may stop at a shop at the side of the road for a few minutes. People will have a cigarette, use the toilets (usually unpleasant but better than sitting cross-legged on a bus bouncing over potholes for 3 more hours), buy some food, stretch their legs. The bus sometimes beeps when it’s about to leave but sometimes doesn’t, so it’s a good idea not to let it out of your sight.

Some buses have roof racks for luggage (and bicycles). Some have a space at the back for luggage. On most buses you will have to put your bag at the front on the gear box, in the overhead racks, on your knee, behind the seat that is just in front of the back door (there is usually a little bit of space there). Or you may have to pay for a seat for your bag. The moral of the story is don’t take luggage unless you have to (which you usually do).

Finally, don’t forget to look out the window. Sri Lanka is an amazingly beautiful and diverse country and the view from your character filled bus is astonishing…

← PREVIOUS POST : How To Eat With Your Hands
What To Wear While Teaching in India & Sri Lanka : NEXT POST →