Olivia Higginson has written her final blog for us as she has just finished her placement in Kerala, India.

VESL would  like to take this opportunity to say thank you for all Olivia’s hard work and for writing blogs for us! 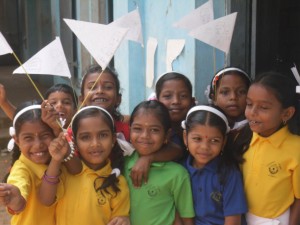 My placement has finished and I have tearfully waved goodbye to all my new friends in Karumkulam. I had such a memorable last week.

My host family and I slowly counted down all my ‘lasts.’ Last game of sevens, last episode of ‘Ross (sic) Petals’, (my host mother’s favourite soap. I have the basic idea of what’s happening but have to make up the script in my head!) and last surprise chicken biryani for lunch.

At least we were putting the Christmas decorations up too though, so things were looking very spangly and festive as I left with the kids eagerly anticipating Christmas Papa’s arrival.I had an amazing last session with the girls at the convent. Recently I had been almost ten days without seeing them because of the local St Andrew’s Day celebration, for which the girls were attending three hours of mass every night. We managed to squeeze in a few more sessions before my departure though. On Tuesday, we organised a small party. 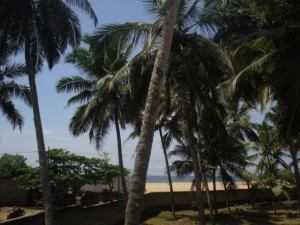 View from the classroom window

The girls had undertaken to prepare a programme of singing and dancing for me in which all the girls, either individually or in small groups, gave some performance. There was even a compere and opening and closing speeches. At the end of the ceremony they had me on my feet and taught me a beautiful and dignified traditional Indian dance of prayer and reflection. I taught them the Hokey Cokey. I think they enjoyed it!

To say goodbye to all my students at St Andrew’s School I decided to organise an English Day celebration. I really wanted a chance to celebrate all that the students had achieved both before and during my placement. I knew they were especially proud of all the songs we had learnt together and were super excited to show them off to the rest of the school.

I may have been a little over zealous in my organisation, and ambitiously decided that the entire school would be separated into different groups, and follow a different timetable for the day. The teachers and I created 6 workstations of activities that the 6 groups of students would rotate around so that all students would be able to try each activity, and also each teacher would have contact with  every student in the school. 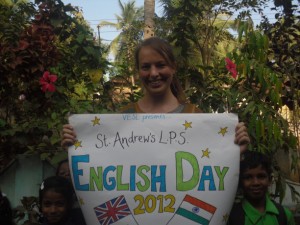 I was a little nervous on the morning, when the bell was rung for assembly and it had still not been decided which teachers would run which station, and no-one yet knew what any of the stations were! All was sorted though during first period and it gave the students a chance to reach a fever pitch of excitement.

The lovely people at VESL very kindly agreed to give me a budget from their ‘Wild Fund’ to spend on resources for the day. Most of the students have little more than a pencil with them, so being able to provide them with pencil crayons, felt tips and materials for crafts and activities was really amazing. The sweet prizes went down a storm too! 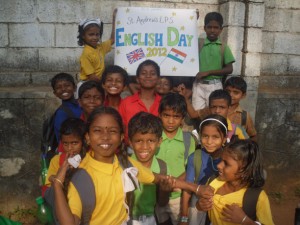 After lunch the students and I had a special English Assembly. All the classes of third and fourth standard got to show off the results of all our many rehearsals, and the lower standards were regaled with our renditions of such classics as The Grand Old Duke of York, Incey Wincey Spider, 5 Green Bottles, Hickory Dickory Dock, Head Shoulders Knees and Toes among others. Then certificates were given out for both Academic Excellence and Brilliant Effort in English. 8 students in each standard had been selected by their class teachers and got a hefty round of applause for the rest of the school. We finished with a whole school rendition of everyone’s favourite: Row, row, row the boat!