Having a number of icebreakers up your sleeve can be incredibly useful! They  can be used initially to warm up a class  or to form a ‘break’ between sections of a lesson. They can be used as a way to introduce yourself to a new class or to introduce a new topic.

Entering a new class can be daunting, but starting with an icebreaker is a sure way to make yourself and the class feel more at ease! They help you to get to know one another and feel more like part of a ‘team’.

Icebreakers can be in the form of songs, games, rhymes or drama. They are characterized by being short, engaging and fun and help the class (and you) feel more united! 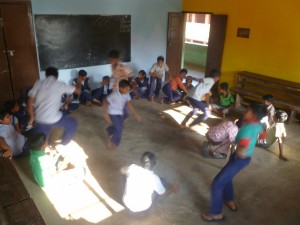 Songs can be used to introduce a wide number of topics! They are a sure way of gaining a class’ attention. You can divide the class into 2 to introduce an element of competition! They are a useful tool to help children overcome their inhibitions.

Drama
You will have to make a fool of yourself to make this work – but no better way to get integrated into your new role!
Here are a few websites where you can find more icebreaker ideas……