Are you a keen sports player? 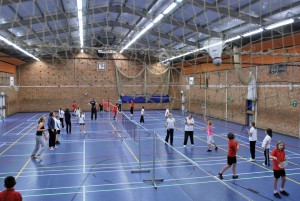 Organise a fun tournament for people to enter – not only will this help you raise money it will also encourage more people to play the sport you love (and if you’re a member of a club you may be able to recruit some new members!). Tournaments are great (especially if it’s a team or doubles game) as it gets people who may not be a pro sports player to give something a go and have fun at the same time!

Volunteers from Edge Hill University ran a successful badminton tournament in 2013 and asked each doubles team to donate money to enter the competition.

How does it work?

It’s normal to reduce the game length, for example a football game may be 10 or 15 minutes each half. Make sure that each team gets to play a couple of games before you start moving into knock out rounds in order to keep peoples interest and their competitive spirit going! For example you could aim to have eight football teams, and split them into two groups of four teams. Each team then plays three games, the top two from each group then plays against the teams from the other group (normally 1st place in group A vs 2nd place in group B), the winners then play each other in the final.

Make sure you have a trophy for the winning team!

How do I raise money?

Ask people to make a donation to enter a team into the tournament, you may want to do this as £2 per player or an amount for a whole team (e.g. £10). Remember that you’re also going to have people watching and taking a break – so you have a crowd that you can sell things too – cakes, drinks etc. You might also want to hold a raffle to help you raise additional funds, make sure you check out our blog for hints and tips on running your own raffle.