Tasha from Edge Hill university has been doing lots of fundraising since she was accepted on the project, and so far has raised £619.00 through different activities & events. Tasha has kindly written this blog for us about how she set up her own gig which raised £204.00.

One of the best methods of fundraising I have came across so far is organising my own event. This is because as well as raising money for a charity, you are also providing business for a venue and a night out for your friends/family/guests/anyone who shows up! Due to my interest in concerts and the fact that I work part time at a gig venue, I decided to set up my own charity concert to raise money towards my trip to Thailand with VESL.

I believe that a concert can be organised in a few simple steps and whilst concert organising can be stressful, I think that these tips will help. 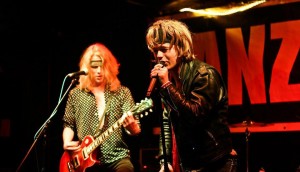 Seeing as I work at a music venue (The Zanzibar in Liverpool) finding a venue was easy for me – my boss was really helpful throughout the whole process and eventually we worked out a date. I was allowed to hire what acts I wanted and basically organise how the night would go – I was going to have an auction as part of my event but just didn’t have the time. I’ve found throughout this process that most people are really helpful when it comes to charity, so if you contact any music venue with a professional tone and a clear plan as to what you want to do, when you want to do it and why, they will almost definitely put you on the bill and may even let you hire out the venue for a discounted price or even free depending on the night. My concert was on a Tuesday, so therefore it was free.

This country is absolutely packed with unsigned musical talent. If you just look at one band Facebook page, it will take you to 10 more, and 10 more and so on. Most unsigned bands will play for free as it’s still a way for them to be heard and helping charity improves their reputation as a band and may even encourage promoters to hire them for future gigs. I just took a look at some Facebook pages and listened to the music on their profiles and sent a few messages. I expected to spend a long time finding my acts, but the first five bands I contacted responded to me all accepting the offer. Just be sure to give the bands all the information about their sound check and set times and just be generally kind and helpful with them – after all they are doing you a huge favour playing for you!

The bands that played for me and that I am extremely grateful to are: 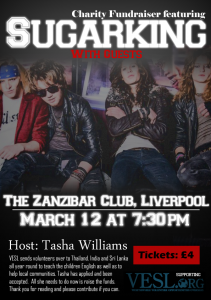 Now that you have your venue and your bands, it’s time to make your tickets and advertise! I’d advise making your tickets at home – a handy method is to design something on word and print it out on card and just cut them up. It may take time but it will save you a lot of money. I wish I’d have done this as I paid a website to print me 150 tickets, and whilst the tickets were in fantastic quality and were dispatched the second they were done, it still set me back £30, which had to be deducted from the overall amount. Once you have your tickets and have sent them to your bands, try and find someone to make posters (or do it yourself!) and put these posters on social networking sites and maybe around your university/place of work. I advertised mainly on social media, as did the bands. I also set up a Facebook event page and invited over 600 people. Naturally not all of them would go, but a fair few clicked attending and bought tickets from the bands. This links to my next point.

Between asking people two months prior and the week before the gig, a lot of Yes’ changed to No’s due to people being sick, or not having money any more or any other reason that they can say. This can be extremely stressful if you have spent months planning a gig only for their friends not to show up. In one day I had about 10 people drop out on me and it made me feel pretty negative about the whole concert in general. But what you have to realise is that you still have the bands ticket sales to count up and it is important to remain positive. If too much time is spent on worrying about who isn’t going, there won’t be enough focus and time to thank the people who did turn up! 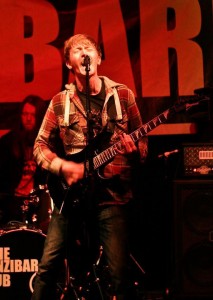 You’ve spent months doing all this work so when the date does come around, sit back and enjoy it! My worries were in vain about people cancelling, 55 people ended up turning up throughout the night and I made £204! It was pretty surreal when the first band came on, the lights dimmed and people were sat around watching, and I realised that I had made this happen. So if you do organise an event, make sure you pat yourself on the back.

It’s hard work but is definitely rewarding, and as well as raising money for charity, you have also helped some bands get noticed!

← PREVIOUS POST : Case Study: A Day In The Life: Sri Lanka
Fundraising Idea: Clearing out your junk : NEXT POST →