Alison Leighton, a volunteer from Edinburgh University, volunteered with VESL in Kerala, India this summer for six weeks, here she describes getting over her initial nerves and the amazing experience of living with a host family.

On 12th July 2013 I left the UK to teach English in a small village near Trivandrum in Kerala, India. When I landed, the first thing that struck me was that I was the target of many stares from the people about me. It was obvious to anyone that I was not a local! It was the first time I had been the only white person in such a large crowd. Travelling to the hotel where I was to spend my first night, I was struck by the unfamiliar noises, smells and scenes all about me. 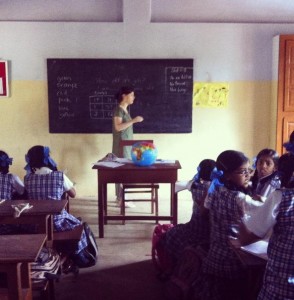 I felt apprehensive about meeting the Indian family which I was to live with for six weeks, but I soon realised there was nothing to worry about. They were extremely welcoming and quickly made me feel a part of the family. I stayed with a mother, her two young daughters and her nephew. The mother told me her husband was away in Dubai earning the family’s wages. She cooked me traditional Indian food for breakfast, lunch and dinner, which gave me a unique opportunity to try local Indian cuisine. Curry was always on the menu!

On the first day, I was not thrilled to be given a pea curry at 7am for breakfast but I soon became accustomed to the change of diet (and the early mornings!) and looked forward with anticipation to the new dishes I could try at meal times.

I had been told that Indians only eat with their right hand. (It is considered to be the clean hand.) This certainly took some time to master! On the first day, my host mother offered me a spoon after much laughter from the family at my useless attempts, but by the end of the six weeks it was second nature to me. Aside from lunch, which I had at school, I ate all my meals with the family, and this gave us much time to bond. I was lucky because the mother and her daughters could speak good English. This allowed us to have interesting conversations which gave me an insight into their life and Indian culture.

I taught English during the week alongside another volunteer from the UK at an all-girls school run by Catholic nuns. The children we taught were aged ten and eleven. We taught together which was helpful as our largest classes had up to sixty children. The main purpose of our teaching was to give the children the opportunity to practice conversational English. The school’s English teachers focused mainly on written English. This was evident by the fact that the children could often read English text but not understand what it said.

We wanted to improve their confidence by encouraging them to speak aloud. Most students were very shy and nervous about speaking in front of the class. Most importantly, through positive feedback and fun activities in the classroom, we wanted to inspire the students to further develop their English language skills after we left. 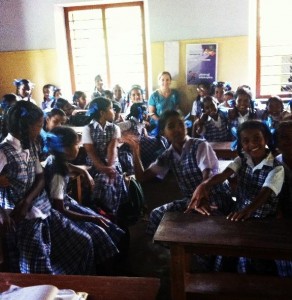 The children mostly came from families who earned their income from fishing. Unfortunately, the fishing industry is not economically sustainable due to changes in machinery and the growth of mass production. It also provides little wages. Through teaching English, we hoped to open up new opportunities for the children, such as progression to university or employment in the tourist industry.

It was not our intention to impede upon the good work that many of the teachers already did at the school. Instead, it was to provide support and assistance to a school which was understaffed and had minimal resources. One problem that was drawn to my attention was absenteeism, both from teachers and students. With no replacement teachers, it was a common sight to see whole classes left to look after themselves for the duration of the school day. It was not considered to be a cause for concern, only an inevitable occurrence.

Similarly, there was not one day when I had a full class of students. On average, about five to ten students were absent from class each day. I can assume that they were helping their family at home, or earning wages. Certainly, for the poorer families, earning extra money was the most immediate concern for them and took precedence over education.

Living with a local family and spending time with the local community gave me a unique and unforgettable opportunity to gain a fascinating insight into Indian life. It was very interesting to gain an understanding of local attitudes and the Indian lifestyle. What struck me is that the notion of family is paramount, and goes above any notion of the individual.

Whilst there is only so much I could do in six weeks, I hope to have made a small but measurable difference to the local community. If there is one thing that I hope to have achieved, it is to have inspired the girls at my school to aim high. Most of these girls will have arranged marriages in their late teens and early twenties and many will become housewives. I hope to have encouraged those who wish to pursue a different option to utilise their potential.

Do you want to go volunteer in Kerala? Apply now!