Tazreen Kassim-Lowe from Keele University has written a second blog (first blog can be found here) for us, reflecting on her experience and memories after spending four weeks in Northern Thailand teaching English. Tazreen and her project partner, Kate, were placed at a rural primary school between Chiang Rai and Chiang Mai, having returned to the UK in July, Tazreen reflects on her experiences and what she missing about The Land of Smiles…

I will never forget my experience of Thailand for many reasons but most of all because it is a place in inescapably imbeds itself in your senses.

For instance the smell, which may seem odd, but I believe it to be a wonderfully sweet concoction of Jasmine flowers, such as the ones handed to us on our arrival to Chiang Rai and the herbs we used to have with our supper and evening conversation. As well as coconuts which grew in the front garden of the house which I just loved drinking the juice from and eating whole. Oddly, I even think fondly towards the smell of bug spray and the mosquito cream which my Thai mother would apply for me. Lastly, I recall vividly the smell of the dinner hall at school as well as the smell of tissues from my last day when I just could not stop crying and had to say goodbye to my marvellous pupils and loving family. 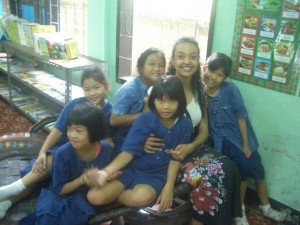 Taz with her students

‘Good morning’ was a frequently received greeting that was said with the same tonal emphasis without fail from every child I encountered. I found myself humming the songs played on the speakers at school whilst the children would meditate, dance and brush their teeth; songs which are complimented by the soothing tones of the Thai language itself which I tend to use on a daily basis now I’m back in the UK. Contrasting this, is the electronic beat of Thai pop songs which I will, in some way or another, eventually integrate in to British culture! When we went to visit a temple there was an elderly man playing an instrument made from coconut shell; he played with such ease and so beautifully he inspired me to buy one of his beautifully crafted instruments. Strangely, the sound that reminds me most of my teaching experience is the cha cha slide which we did with the children before every lesson, roughly 5 times a day.

Since coming back to the UK I have discovered, which I think I already secretly new but just accepted, being a student, that our food is a bit on the bland side especially when compared to the aromas, variety and quality of Thai food.

I did not encounter anything that I didn’t like – everything was ‘lumb te te’ (delicious) as I would say to those who had cooked. Every time I said this phrase to my family it was like the first time I had said it – they loved it ! I even asked for some recipes.

The main meals that stick out in my mind was a cassia curry which made me very drowsy, coconut soup and the incredible fruit as well as the various quality restaurant meals even if some of them weren’t aesthetically pleasing there was always a high standard of food quality and quantity! The little condensed milk sweets the children would share with us and the slush puppies sold outside the school. Not forgetting the accidental black chilli I consumed which felt like my brain was melting in my mouth – as a result my spice tolerance level, already high, has definitely raised so I view it a  positive experience for my adventurous taste buds. I know that any supermarket bought Thai food or even Thai restaurant will not compare to the real tastes of Thailand. 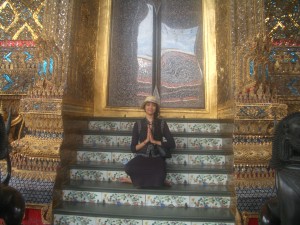 Taz outside of a temple

The sights that come to mind instantly are the shimmering temples we visited including the sparkle of the grand palace in Bangkok. One mountain in Chiang Mai took us up so high that we were above the clouds! My camera ran out of space as there were so many ‘suay’ (beautiful) things to see.

One of the most rewarding things to see was the sense of achievement a child had when they were rewarded in a lesson as well as just seeing how much the children respected their teachers and loved school. Most enlightening was simply seeing how another culture lives and functions with simplicity, respect and generosity as major Thai values, I think. 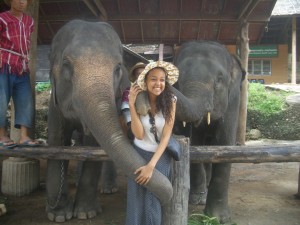 To ride an elephant is one thing but to be kissed by its prickly trunk is like being sucked on the cheek by a wet vacuum – I recommend it. The children found shaking my hand absolutely hilarious as this form of introductory contact is not common in Thailand; rather, palms together and a slight bow of the head with ‘sa wa de ka’ is the done thing. Again, this is something I found myself doing when I got back to the UK and at first shaking someone’s hand came to me with almost as much hilarity as it had done for the children. I also remember rubbing a gong to get it to make a sound; I wasn’t much good at it but my Thai Mother was. She would also hold my hand when crossing the road. On my last day a little boy held my hand and just would not let go, it made me terribly sad to leave.

I miss them all so dearly and write to my Thai mother and intend to do so for a long time in order to show my respect and convey my appreciation as I feel my Thai family, pupils and the Thai people gave me so much in terms of teaching experience, cultural enlightenment and Love.