You may have seen some of our past updates from Bob who is in Sri Lanka at the moment on a long term placement (for the third year in a row!), if not you can check them out here. Bob is coming to the end of his placement and has e-mailed to tell us about his upcoming end of term celebrations that are happening on the 5th March! 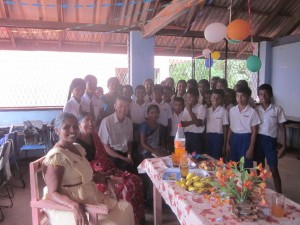 Bob with his 7A students

Well we are in the final stages of rehearsals for our English concert which is on the 5th March. We’ve got songs ranging from The Wheels on the Bus from Grade 3 to Coldplay’s Yellow from Grade 11, poems including The Owl and the Pussycat and On the Ning Nang Nong. We have the drama group performing Stone Soup and Grade 12 and 13 boys Western dancing to Club Can’t Handle Me by Flo Rida. That’s only on my Ipod because of the influence of my Grandson but it’s been a big hit with the break dancing older boys. I’ve almost persuaded a group of female teachers to perform Adele’s Make You Feel my Love. They have been so supportive staying after school every day to help. Jake and I are going to perform in Sinhala Ran Kulahan Mala (wonder what this sounds like? Check it out on YouTube here) which was a big hit 3 years ago and for the finale we are doing Hey Jude with all the cast on the stage doing the Na, Na Na Na Na Na chorus. I,ll take lots of photos and send you some.

Last Saturday I went to Jake’s [another volunteer] football training. Tomorrow there is a big inter school football competition in Mirigama and Jake’s under 17s are playing. My school haven’t got a football team but the Principal has given me the day off to go and support Jake’s school.

One of the big pluses for me of volunteering with VESL has been making friends with people who are nearer in age to my grandchildren than my children.

We will bring you some photographs from the day in the next few weeks!