By Kath on November 30, 2011 in Blog Travel Advice Volunteer Advice

A normal part of daily life

In many places bargaining is a normal part of daily life but it can be hard for foreigners to get used to.  It’s difficult to get over the feeling that you’re being rude or that you might insult someone, however, bargaining is the usual medium of exchange and people will think you’ve got so much money that it means nothing to you if you don’t at least attempt to barter.

A good piece of advice that really helped me was –

If you didn’t feel that you’ve been ripped off at the time then don’t allow yourself to feel angry or bitter if you later find out you paid too much…  just chalk it up as a lesson learnt and congratulate yourself to helping the local economy!

Don’t be afraid to walk away

Don’t be afraid to walk away if you think you’re not getting down to a fair price.  Just say no thanks and leave…  It’s amazing how many times the ‘best local price’ comes down by 50% when you’re out the door and 2 meters up the road.

If you’re bartering for a tuk-tuk or auto-rickshaw – walk to the next driver and play them off from one-another; try cutting the first driver’s best price in half as your starting price for the second driver and see where that leads.

Don’t get too carried away

Once the bargaining bug bites you it’s all too easy to think it’s a game, forgetting it’s someone’s livelihood.  It’s a reasonable price you’re aiming for – not the lowest price in the Country!

Be sensitive when you are bargaining. Try to remember that you’re using local currency and that 50 rupees is not the same as 50p.  It’s a good idea to walk around the market and get a feel for how much things cost so you can better understand how much that money might mean to someone in real terms.

Pay close attention to what other people are paying for the same things (but be prepared to always pay more than a local – think of it as a foreigner’s tax).

Agree a price before getting in

IMPORTANT!  You should ALWAYS agree the price of a three wheeler / tuk tuk / auto rickshaw BEFORE getting in. 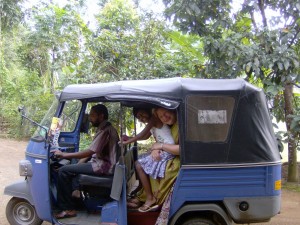 Millicent Scott in a Tuk Tuk

If you don’t agree a price, you have no reasonable argument to not pay whatever ridiculously high price you’re charged at the other end!    However, be prepared for some argument if the driver isn’t exactly sure where he is going. In some cases this is genuine and the initial price they quoted was unrealistically low so be prepared to pay a bit more if it took longer than you anticipated and you think it’s reasonable.

Keep a store of small change

Finally, and possibly the best tip of them all, is to make sure you collect up as many low denomination notes and as much small change as is possible.  It’s amazing how no-one has any change (or says that) and it’s pointless to barter someone down to a price and then hand them a large note.  In practice that means trying to constantly remember to break larger notes and keep back change in large shops, supermarkets or in train stations – places that have tills rather than pockets!