5 Things to See and Do in Chiang Rai, Thailand

By Lauren on July 20, 2012 in Blog Travel Advice Volunteer Advice

Following on from our blog on what to see and do in Kerala – we didn’t want our Thailand volunteers to feel left out, so we got in contact with some of our past volunteers and have put together a list of top things to do in Thailand – after all you will want to get out and visit the local attractions, won’t you?! 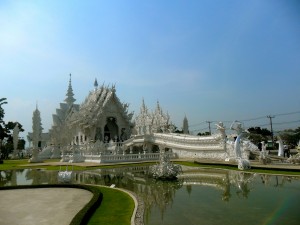 The White Temple, photograph by Hannah Pilcher past VESL volunteer

The White Temple or Wat Rong Khun
– this is a Buddhist temple that was built in 1997 (it took ten years to construct) and designed by a famous Thai architect, Chalermchai Kositpipat. It is located about 5 kilometres south of the city. It is a national land mark, and has become increasingly popular over the last couple of years. The temple is white to signify the purity of the Lord Buddha. A lot of VESL volunteers visit the temple when they are out in Thailand and have said it was their top place to visit.

The Doi Tung Mae Fah Luang Garden
– the garden was originally made to give Thai people who do not have the opportunity to go overseas to experience different flowers, this was done on the Princess Mother’s wish. The flowers are looked after by local villagers, and benefit the local people through employment and catering to the tourist industry. The gardens were awarded the Pacific Asia Tourism Association’s PATA Gold Awards in 1993. The gardens are open daily from 07.00 until 17.00. There is a statue in the centre of the gardens that is a tribute to the Princess Mother’s efforts to improve the lives of the people in Thailand.

Hill Tribe Museum in Chiang Rai
– a museum situated in the city of Chiang Rai that provides lots of history about hill tribes, it promotes responsible tourism and is highly recommended to visit before going on a trek to the local hill tribes. Exhibits include information about the history of opium and how it impacted the hill tribe populations; it has a range of artefacts and includes a twenty minute slide show presentation on the history of hill tribes. The museum is run by the Population and Community Development Association (PDA) and the museum helps to fund hill tribe community projects. The museum is located next to the famous Cabbages and Condoms Restaurant which is also run by the PDA, income from the restaurant is used to promote family planning and raise awareness about prevention of HIV/AIDS; hence the name. 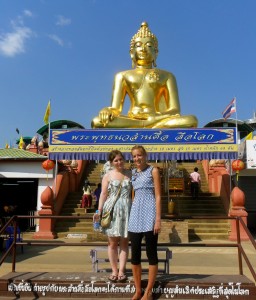 Past volunteers, Hannah Pilcher and Eleanor Reilly, at The Golden Traingle

Chiang Rai Night Market or Night Bazaar
– this can be found next to the bus station and has a good range of local handicrafts and food (it is a smaller version of the famous Chiang Mai night market). In the middle of the market is an open air food court, people from the local hill tribes sell artefacts here and there is often live music and entertainment. Just remember to get your bargaining hat on!!

The Golden Triangle
– this is where Laos, Myanmar and Thailand meet, locally it is called Sop Ruak. The area is historically known for the growing of opium and was one of the largest opium producing areas in Asia, but now is a large tourist attraction. The Hall of Opium is a museum that volunteers have recommended going to, it exhibits the history of opium globally from production to smoking to eradication campaigns.