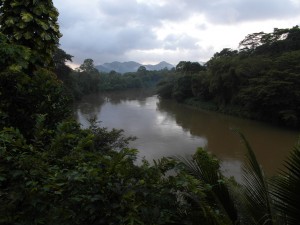 View from my room at the host family’s house

I arrived in Sri Lanka half asleep in the afternoon, I was expecting the chaos that greeted me when I first arrived in India (hundreds of people pushing and shoving to complete forms and get through immigration) but arriving in Sri Lanka was unbelievably calm, I queued for immigration and was through to collect my bag within twenty minutes.

Waiting at the arrivals was my ride to the hotel, I walked out into Sri Lankan air and was hit by the humidity, but I was quickly bustled into a car and taken to Negumbo about 20 minutes away, where I checked into my hotel. I stayed there one night before heading to Eheliyagoda to meet Prasad, one of VESL’s in country contacts.

I have to say I was pretty terrified using the pubic buses by myself, speaking no Sinhalese and not being able to read the writing, however it was surprisingly easy. I got the bus to Colombo with no problem, there I had to change for another bus, having asked someone at the station which bus to get, they pointed to the one directly in front of them. I was a little skeptical that it would be that easy, so when I got on I asked some passengers which resulted in a five minute, very heated debate as to whether or not the bus did go to Eheliygoda, however they finally agreed that it did! So I took my seat and the bus conductor luckily let me know where to get off, which involved a lot of squishing past people/clambering over them/practically falling out of the bus! 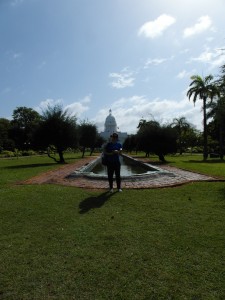 When I met Prasad he took me to stay with a host family, and I totally forgot how welcoming and lovely host families are. They invited me into their home like I was an old friend and showed me to my room. They looked after me like I was royalty! I spent the evening with the children looking through their work and playing some games.

The second day I visited four of the projects that VESL’s volunteers will be working at this September. The teachers were lovely and unbelievably thankful for the volunteers being placed at their schools. A past volunteer who originally went out for three months and then extended her stay for seven months, is very popular in the area, all the schools knew of the work she had done at her host project and were looking forward to the volunteers arrival.

In the evening I went for a walk with my host family to the temple and across the bridge, their house has a magnificent view across a river. The next day I went into Colombo with the host family who needed to go to the hospital, so they left me to wonder around. Again I was faced with getting a bus, but again it was surprisingly easy and the conductor told me where to get off. I got to explore a bit, so I walked past the town call and into Viharamahadevi Park. Where someone who claimed to be a ‘gardener’ decided to take me on a tour of the gardens, which was very insightful except that he wouldn’t leave me alone and I couldn’t figure how to get out of the park!! After that I went to the Slave District where I visited two temples, one was the Gangaramaya Temple which has a temple elephant (which I have to say looks very sad), the temple is very random and has numerous rooms to explore.   Unfortunately the next day I was ill and ended up staying with my host family for a further two days, after being told off for not getting them in the night when I was ill! I was immediately told I needed to go to the hospital but I eventually convinced them that a day of rest would be fine.

I spent the evening helping Lohan (one of the host family’s children) with his first ever art homework, which was really cute! A day later I had to say goodbye to my host family, I was ridiculously sad to say goodbye considering it had only been four days, and was very close to tears when they gave me a gift of bangles and a necklace, I was very touched! Luckily (or there would have been tears from me and my host mother!) it ended up being a quick goodbye as I was hastily rammed onto a bus headed for Colombo, where I spent about 30 minutes trying to make sure myself and my bag remained inside the bus! 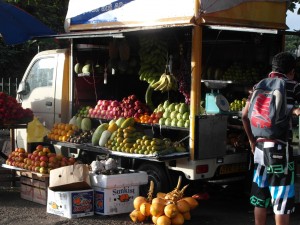 I have to say the food was amazing, I only tried one thing I didn’t like a fruit called durian which was unbelievably disgusting! I knew from the smell I wasn’t going to like it (something along the lines of cheesy feet is probably the closest thing), but I took a bite anyway and I tried to cover up how horrible it was but my host family could tell by my facial expressions (I was trying to conceal them- obviously not very well!), they thought it was hilarious! I on the other hand did not, I couldn’t get the taste out of my mouth for ages!! Apart from that I had some amazing fruits I had never previously heard of including rambutan and mangosteen (try them if you go, mangosteen especially was amazing!), as well as papaya, mango and pineapple (just thinking about them makes me hungry!). The rest of the food was also delicious! I had an amazing curry and roti (very different to the Indian roti) one evening. Trust me when I say you won’t starve, I was fed like a Queen!

I completely fell in love with Sri Lanka (and yes to anyone that knows me that may not be a surprise as I say that about most new places I visit!) but it is a stunning country, the people were unbelievably welcoming and helpful and there is so much to see and do! However my next destination is calling, so I am now heading to Kerala, India – Stay tuned!

← PREVIOUS POST : How time flies… [Volunteer Journal]
5 Things to See and Do in Chiang Rai, Thailand : NEXT POST →