For the next five weeks I am a Student Leader for the volunteers that are in India this summer, my next couple of blog posts will reflect on this role and my time in India.

My first week in India has finished all too quickly and it has been an amazing, busy week! After some trouble actually getting to Kerala (my flight was rerouted to Chennai and then I missed my connection) I finally arrived at Trivandrum airport over 12 hours later! I was greeted by Johnson (the in-country manager) and his fiancée and in typical Indian style we proceeded straight to the Tea House at the airport and had a cup of chai! After this we headed to Kovalam where the three volunteers from Edgehill University were acclimatising to the Indian culture and heat. We went out for a bite to eat where I tried to remember what was what on the menu and help the volunteers choose what to eat! We had an early night in preparation for a busy day on Monday… 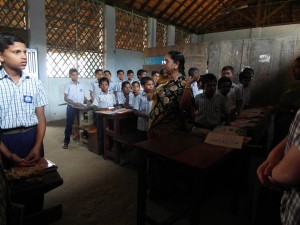 The headteacher introducing us to one of the classes

Introduction to the schools

Monday morning we got up and ready for our first visit to the schools, we got an auto from Kovalam to the village where Aimee and Steve are volunteering and waited for Johnson, whilst waiting some students came up to us and practiced their English, it was the first time their school had ever had volunteers so the students were very excited.

After being given Chai, cake and a banana (luckily we didn’t eat breakfast on my warning we would be fed a lot today!) we attended the welcome assembly.

Originally all students were lined up outside but the heavens decided to open (monsoon has been particularly light this year, so this was seen as a sign of good luck) and so the students quickly ran for shelter. However assembly still continued with students spread out across the school.

We received the most amazing welcome – as soon as we stepped outside we were greeted with deafening applause, there were then several speeches from different members of staff. We were then asked to get up and do a speech, I was first and greeted with hysterical laughter from the children after my first two words (‘Good Morning’), apparently because they couldn’t understand my accent!All the volunteers got up and did a little introduction speech. After school we were taken to the priests house where we were given porridge to eat (we were all very glad I had skipped breakfast at this point).

Once we had finished we headed to the school where Lucy and I would be teaching, we were introduced to the new head teacher and then taken around the classes, and given another cup of Chai. This is the same school that I taught at last September so it was great going back and seeing everyone, the class I taught last year though have moved up to the secondary school (on site) so I won’t be teaching them. When we walked into the classrooms the School Secretary asked the students who I was and they all shouted ‘Lauren Teacher’, which was lovely!

Once we completed our tour we were taken to the staff room and spoke to the teachers, we then headed outside to speak to the students and were very quickly mobbed. The students were definitely surprised that I was back and very happy to see new faces in the school (although they were very disappointed Eve – my volunteer partner – had not come back with me!)! 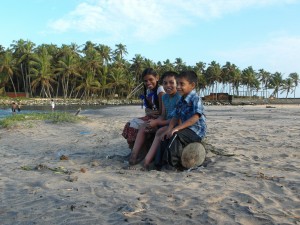 Spending some time with my host family on the beach

Once we were finished at school we headed to one of the volunteer’s host families for lunch. Eve stayed at the house so I knew the family very well and it was lovely to see them again. I was also aware that Emelda was very good at ignoring people when they said ‘enough’ to more food so I taught the volunteers their first words in Malayalam – ‘venda’ (no I couldn’t have any more) and ‘mardi’ (enough), possibly the most frequently used words of any volunteer in Kerala!!

After lunch we went to my host family, the same host family I stayed with last year. I was very happy to see them again, the children were unbelievably shy and Vitchu looked like he was about to cry (from fear!) when he saw four white people sitting in his house!

After practically begging my host family to not feed us anymore food (we were fit to burst) they settled on giving us some 7up. After this we headed back to Kovalam to plan our first lessons and grab our bags and then move into our host families…

The first night Lucy came over for dinner and was quickly introduced to the neighbouring families and children. Some of the children disappeared for a bit and then ten minutes later came back with gifts for both of us, which was really sweet! The children in my host family did not stay shy for long, possibly twenty minutes max! The father in my host family is an artist and so had decorated my room with three paintings, which are really beautiful! I settled back in very quickly, I was tested on my Malayalam within an hour of being in the house (I knew this would happen so had quickly brushed up on my skills before leaving England!), it now feels like I have hardly been away!!

The next day I walked to Lucy’s house to pick her up for school, I was escorted by an entourage of five children who are relatives and neighbours of my host family (it really did feel like I had never been away!). Lucy and I were team teaching for the first couple of days as Lucy had never taught before, I took the first two lessons and then Lucy took the second too. She did amazingly well, we used all the methods that Eve and I had introduced last year and the students responded well, remembering all the classroom rules and the reward sticker charts we introduced.

Last year we ran English clubs for some of the classes, and they were quick to ask when they would be so we arranged our first English club for Friday. Lucy and I team taught for the rest of the week, except on Friday when I went to visit two other volunteers in a different village with the father from my host family who was running some art classes at the school. The first week of teaching went well for all the volunteers and we headed into the weekend with a sense of achievement and a need for some rest!!

We spent the weekend with our host families, on Saturday all the volunteers headed into the city with some members of our host families coming too and we watched The Amazing Spiderman! The Indian cinema is an experience in itself with the cheering and clapping that happens in the exciting or romantic parts of the film. On Sunday we all did our own things, I went to the beach with my host family and my old students who went absolutely crazy playing football and having water fights on the beach!

Next week we have managed to line up an after school class for every night of the week, from tuition for undergraduates to a sports club to English clubs… wish us luck, I think we may need it!! PS Check out Lucy’s blog (one of the volunteers) – it makes a great read!