Lucy Allcock is a student from Edgehill University and she is a volunteer in one of the Student Leadership Programme teams from Edgehill. Lucy has completed her first week in India, here she enlightens you all on how the time has flown by and what an amazing time she has had so far…

Wow! It’s already been a week since I arrived in India; it has gone so fast which makes me feel sad to think my remaining five weeks is going to go just as fast.

The first thing I can remember as I got off the plane at Delhi (before my connection to Trivandrum) was the blast of the suffocating heat that swallowed me up and spat me back out again, a lot wetter than I started out! I’d already been warned previous to my arrival, that although it was monsoon season, India hadn’t had a lot of rain, but this was something else. You all know the feeling you get when you get off the plane in a foreign country? Well times that by a hundred and you might be able to feel near to how I felt. Sticky, springs to mind.

Another thing I can remember is the automobiles; they were like a motor-tricycle with a cover on, (that’s the best way I can describe it!) in other words Tuk-Tuks! They looked slightly dangerous, without any doors… I guess slightly is an understatement. But I suppose when your India do as the… I was quickly introduced to their way of travel; on one trip cramming FOUR of us in the back. 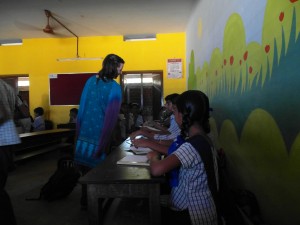 Lucy teaching one of her classes

When finally arriving in Trivandrum, we were taken to Kovalum Beach, an Indian tourist resort where we stayed in a hotel over the weekend, so we could settle in and rest after our disastrous travelling episode. During the day we took walks along the beach only to feel like celebrities! We got stares left, right and centre from the locals making us more aware of our dress, we aimed not to offend anyone making sure our shoulders were covered, we had loose clothing and trousers or skirts that covered our knees. I think we fitted in well!

The following Monday we went to visit the schools where all of the volunteers would be teaching. We first went to the school where Steve and Aimee would be teaching English, the school was very big combining primary, secondary and college together. We were greeted very kindly by the schools Principle and teachers; they offered us cups of Chai (tea to us in England) and biscuits. I tried, honest but my hatred for hot water and milk came spiralling back up, I think that will be my first and last cup of Chai during this experience!

The school held an assembly for us; in front of the whole school the Principle thanked us for being there, offering our time and experience to teach some of his students English. We all had to say our name and a bit about what we’d like to achieve from the experience, on a microphone in front of probably over a thousand students and teachers. DAUNTING. I guess we all had to suck it up; after all that’s what we were here for. Although the classes wouldn’t be that big? I hoped! The students and teachers were all very excited as this was the first set of volunteers to attend the school; they showed their appreciation with cheers, applause and the biggest smiles I’ve ever seen!

After our tour, we went to the school where Lauren and I would be teaching in. Lauren and another volunteer had already taught at this school so the students and teachers knew what to expect although they were still excited and curious to see some new, unfamiliar faces! Again we were made to feel very welcomed at the school, like special guests, if only they knew!  Meeting the students and teachers made me even more excited and nervous (probably a tad more nervous) to get started teaching and hopefully learn from the students to.

Later that evening we were all separated and taken to our host families, this was the first time since arriving in India that I would be without my other trustee volunteers and it hit home that I was a long way from home. (Yes, I cried. Those who know me will know that this isn’t out of the ordinary!) But soon enough my tears were replaced with happiness, smiles and laughter. I had been placed with the most loveable, friendly, warm host family I could have imagined. They saw me to my room which had a double bed and an en-suite (something I don’t have at home, maybe I’ll stay?) Sleeping that night was a little difficult a mixture between; the time difference, the sound of the sea and the noise from the fan above my bed, all things I’m sure I’ll get used to (or I better had!)

In the morning I woke up at 7.30am ready for breakfast at 8.30am – I would have had to get up about 7am but because I don’t like Chai I don’t have to. What did I have for breakfast you might want to ask me? Well I had toast, cereal, and fruit and freshly squeezed orange juice. Jokes. I had a rather large helping of rice and curry, oh and a banana! Curry for breakfast is something I’m definitely going to have to get used to.

Then it was off to school. Lessons started at 9.30am and I would teach four classes till 12.30pm. Lauren and I team taught for the first couple of days, so I could ease my way into it. The students were very responsive and showed signs of being eager to learn. This really gave me the encouragement and imagination for my lesson planning ideas for later in the week. 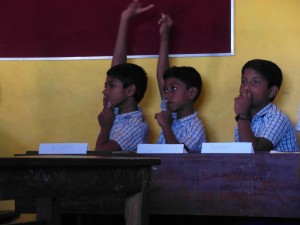 Students on their best behaviour!

We started off with a recap on the reward system Lauren and Eve (a past volunteer) had set up. This was really helpful as the students were aware of the rules of the classroom and driven by the sticker chart rewards making teaching control a lot easier. By the end of the week I had taught lessons completely on my own and I felt completely at home, I was quickly learning a lot from the students and they seemed to be learning from me. We were enjoying ourselves in the process! The classroom always filled with laughter and smiles and a few uncontrollable shouts. A perfect working environment!

I think the biggest culture shock of the week so far has definitely got to be adjusting to the food and the way of eating; only using your right hand. (Sitting on your left hand helps a lot the first few meals!) Don’t get me wrong the food is amazing, a true taste of India and the smells from the cooking are so rich, powerful and traditional that you just couldn’t say no to it, whether it be morning, noon or night (no matter how weird that is for us foreigners) it’s just the portion size. I mean I always thought I was a big eater, but here two spoon fulls of rice and curry is all I can stomach. However Emelda (my host mother) doesn’t shy away from putting more on my plate in a true motherly way, which has prompted the first word that I learnt in Malayalam ‘Mardi’ meaning ‘enough’ encouraging the second word I learnt ‘nunni’ which translates to ‘thank-you’.

So far so good. I don’t know how this week can be topped, but I’m sure India will find a way.”