In true context of this post, we have been so busy that we have not had time to write another post – so although this a little delayed… here is my next post about what we have been up to in our free time!

We have managed to become involved in lots of different activities after school each day of the week. On Mondays and Wednesdays we work with the local NGO, VESS, and teach undergraduate, and AS and A level students. On Tuesdays we run a sports club for one of my old classes and on Thursdays we run an English club for one of Lucy’s classes. 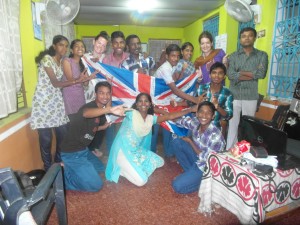 Lesson on the olympics

Running English classes at VESS is great because it means we are able to teach a different level of English, so it is a nice break from Head, Shoulders, Knees and Toes (although I am sure our tuition class would love to sing that too!).

We have run a number of different sessions so far from classes on poverty to the Olympics, from tourism to relationships. We have had some great debates and we have been able to learn a lot about Indian lifestyles and cultures, it has definitely been a two way learning curve! We know a fair few people in the class who are either relations of our host families or relations of students that we teach or I taught last year, which means they aren’t as scared of talking in English to us which is great for debates.The classes have caused quite a lot of laughter, I had to get down on one knee and propose to Lucy to demonstrate what a proposal was. We showed the Mr Bean and James Bond clips from the Olympics opening ceremony which they loved.

Tuition has been a great way to get further involved in the community and a way of making some great friends. 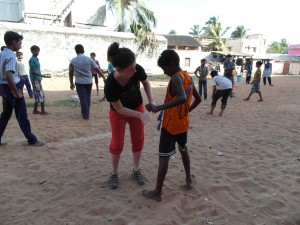 We started a sports club for one of my old classes because they thought ‘I was angry’ with them and that’s why I wasn’t teaching them. After explaining that we didn’t choose who we taught, Lucy and I decided to set up a sports club so they could spend some time with us. I don’t think we knew what we had let ourselves in for!

The first class we played football, we split the group into two and Lucy and I were both on a team. The girls had no idea how to play football and spent the first twenty minutes of the game standing still. After re-explaining that they needed to get the ball in the goal, one of them said ‘can I just pick it up and run to the goal?’, it would have been pretty  funny to see the boys reaction to this but I think it may have started a war!

I had already had about five arguments with the boys about free kicks, penalties and fouls – it was a pretty full on hour! However after over-running by twenty minutes we finished the class and were asked if we could do it again tomorrow.

The following week we had to relocate the class to the beach because we were introducing rounders to the students and building work was going on at the school, and we didn’t want to be responsible for any smashed windows! Explaining rounders was quite tricky, but eventually we got there! We attracted quite a lot of attention from local fishermen who wondered what we were doing, but after a close game (my team won!) the students decided to go for a swim.

Last year we started an English club for some of the students which is basically an hour of games and fun, so we restarted it this year as the students requested it in their first lesson! It has been good playing all the old classics like Duck, Duck, Goose with them and teaching them some new games.

The students love to spend as much extra time with us as possible, it is a great way for them to practice their English and have fun at the same time!

Some of the acting skills we have seen have been hilarious, we asked a student to act out Mr Bean – we should have videoed it, it was comedy gold!

The rest of the time?

On a daily basis we are asked by our students to go to the beach, on days we have tuition we can’t but we do often go at least once a week.

It is common in my lessons when I explain something and ask if the students if they have any questions, students put their hands up and ask ‘going to the beach today, four o’clock?!’ Even one time during an assembly a student was mouthing ‘beach’ to me! The children in my host family often come with us, so it is a lovely way to spend time with students and my host family. Other than this I often spend the evenings with the children from my host family and neighbouring houses studying English, colouring in and playing games. 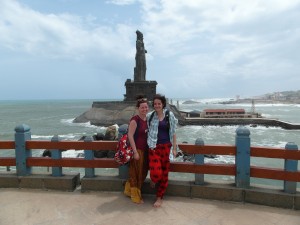 Lucy and I at the tip of India

Our first group weekend away was in Kanyakumari. It is where three seas meet; the Bay of Bengal, Indian Ocean and the Arabian Sea. We got the boat out to the island that is just off the tip and is a dedication to Vivekanada. We also went to the temple, Lucy and I managed to get conned into paying 10 rupees to skip the queue (we thought it was an entrance fee)!

We also walked to sunset point and watched the sunset, which was lovely, except a guy was a little bit incessant in trying to sell us necklaces and even spent a good five minutes trying to sell Tom a pink shell necklace, needless to say he didn’t buy it.
I can honestly say that I have completely managed to fill my week up with numerous different activities, sometimes I find it difficult to work out when I am going to have time to wash my clothes!!

Spending time with the students and other people in the community is great, I learn a lot from them and know that I am going to find it very difficult to leave.