By Lauren on September 28, 2012 in Blog Volunteer Advice

Sarah Redgewell volunteered with VESL and below explains the different ways she raised money to reach her fundraising target, most importantly Sarah was able to have fun and fit in the fundraising around her final year of study at university!

“At first the thought of raising my contribution was fairly daunting, especially because I had my finals and dissertation to think about.  Yet as soon as I got into brainstorming ideas and the preparation it really became enjoyable part of my overall experience rather than a chore. Talking about the trip with my family, friends, classmates and work colleagues was the most beneficial thing I could have done.  Everybody wanted to hear about the project and when they heard I needed to raise money they all started to throw ideas at me and offers to help out.

I was lucky in that the company my uncle works for (who also have various offices in India) donated £450 pounds. 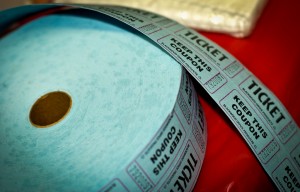 It’s usually pretty difficult to get donations from businesses so I would say stay focused on companies that have a personal interest in you or the country you’re visiting.   Alternatively use your local library to find contact details of local trusts as most people often find them far more fruitful.  When asking for money insure you include details about VESL, the project and its benefits, why you are personally interested in it and exactly how much you want and what for.  Putting time and thought into your letters is definitely important, it may seem tedious at the time but when successful this method is by far the least time consuming or demanding.

I thought through numerous ways to fundraise the rest of my donation, from cake sales to a sponsored swim but finally decided upon a charity night in the bar I worked in.  Holding a charity night meant that I could get everyone involved without feeling like they just had to give me money.  On top of this the organisation did not put too much of a strain on my limited time nor cost very much.  It is important to think carefully about your expenditure as this can greatly affect the amount you raise.  The only things I bought were charity collection pots which where incredibly important.  I picked up two collection pots and one collection bucket from Ebay (if you plan to do the same remember to buy the seals and labels too).  I designed my own labels using PowerPoint and the images that can be found on VESL’s webpage.  Importantly, I included the Registered Charity Number and VESL’s contact details.  Using collection pots is far more successful if they look as professional as possible. 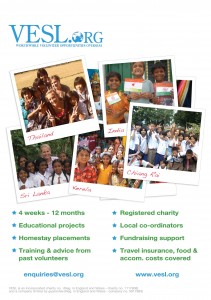 Use the VESL fliers to help publicise your event and make your own posters!

I prepared for the night by designing posters and leaflets for tables which I had out for 3 weeks before the night.  I had a few VESL leaflets laminated to place on the bar which meant they were kept in prime condition for everyone to read.  I also arranged for a friend of a friend to come in and DJ that night and the bar even gave him a little bit of money and free drinks on the night to say thank you. Finally I made sure I told everyone about the night, Facebook and E-mail is a great way to get the message out and I found that even people that couldn’t come sent me a little bit of money anyway!

The main ways of raising money on the night was through asking for small donations on the door, a raffle, selling Sambucca and finally just leaving the two collection pots of the bar for loose change.  All the prizes for the raffle had been donated by the bar, friends and family.  They included a new DVD player, various bottles of wine, champagne, vodka and some silly promotional items that I squeezed out of stockists.  I sold over 400 tickets making about £200.  I also bought a bottle of Sambucca at cost price from the bar and sold shots for £2.00.  This was particularly fun as it really wasn’t hard to persuade people to buy a shot especially when they heard I was taking the profit from it.

Overall the night was very successful and I raised over £350.  Everyone came along and enjoyed themselves and although it was clear what the night was for I was careful to make sure that it wasn’t too ‘over the top’ and people genuinely felt like they had come out for a regular night out with the charity part as an extra bonus.  Many people misread ‘charity night’ as ‘boring and dull’ so doing all that is possible to step away from that misconception is definitely a recipe for success.  Another tip for success is to be careful with your manner when approaching people to make donations, if your enthusiastic it will rub off on them.  Don’t be too forceful and if people don’t want to donate say your thanks and move on.  Be prepared to answer questions and always offer as much information about the project and VESL as you can. ”

Finally, have fun: fundraising is part of the experience and should contribute to your excitement and enthusiasm about the project!