By Lauren on September 17, 2012 in Blog Volunteer Advice Volunteer Feedback 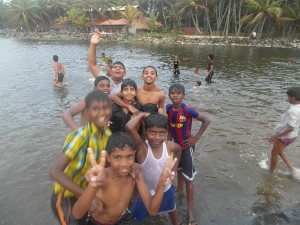 Saying goodbye is possibly the hardest/worst thing about volunteering overseas and it never gets any easier! The last week at school was pretty hectic, I arranged to visit two other volunteers at their school before I left and I also arranged to visit a new project on the Tuesday afternoon after school, running all our clubs and tuition classes it has been a bit of a manic last week!

It was great being able to go and see the other two volunteers teaching; the previous week I also visited two other volunteers at their school. I am really proud of all the volunteers, they have all done a great job and the feedback that we have had from staff at all the schools has been excellent. Demand for volunteers in the area is steadily growing and it was great to be able to go and visit a new project in a nearby village.

It has been a week of ‘lasts’ as I was reminded by my students endlessly throughout the week, it’s our last English club so…’, ‘it’s our last lesson so…’ and ‘it’s your last day, so we have to go to the beach’ (the latter really wasn’t an option – I had at least forty students turn up at my house on the last day saying we were going). 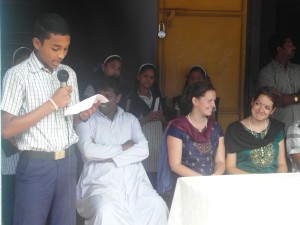 Student reading a speech at our leaving assembly

We had a lovely leaving ceremony at school with the whole of the UPS students and staff. We didn’t know it was happening until the day, so Lucy and I hastily wrote a speech five minutes before the assembly! There were numerous speeches, all of which nearly bought me to tears. Two students got up and both did speeches, one of which was my student from last year thanking us for still spending time with his class. One of the English teachers stood up and told the students and staff that we should not be called ‘foreign teachers’, that this was our second home and we were now locals, she also asked the students what our classroom rules are and they all stuck their hands up to say, they even clapped the beat to our ‘copy, clap, listen’ rule. We were given gifts by the staff as well, and then the staff had arranged to cook us lunch – which was massive! The school manager said goodbye by saying ‘when will you be coming home again?’

Saying goodbye to my host family was super difficult, the night before Lucy came over for dinner and so did Johnson (the country manager) and some of his family members, we had a lovely dinner and they cooked my favourite. I had to leave at seven in the morning but everyone was up and ready to say goodbye, it was very hard! My host mother is pregnant and the baby is due any day so I am especially sad that I have missed seeing the baby. We had a bit of a photo shoot before I was allowed to get in the auto the airport. I said goodbye to the children and Vichu told me I wasn’t allowed to go, thinking back I have no idea how I held it together until I got to the airport. 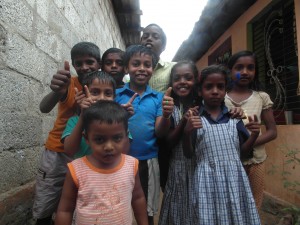 Children in my host family

The things I will miss the most – (1) Vichu saying ‘Lauren Aunty Goodnight’ at least twenty times every night before he went to bed – one night he did it until he got to 63 (his mum then told him to go to bed or I would be leaving tomorrow – he was suddenly very quiet)! (2) Going to the beach with the students and my host family and playing games. (3) Being told I need to eat more pretty much on a daily basis as I walked to school. (4) Teaching – two of my classes went insanely crazy whenever I walked into teach them because they were so excited I was there, always a great feeling even when it takes five minutes to settle them down and get them working! (5) Not being able to see my host mother’s baby but Lucy and I were told to think of names, we came up with Joy for a boy and Jasmine for a girl, we are waiting to hear whether one will be used!

There really is an endless list of what I will miss… but hopefully I will get to visit at some point next year!

Interested in being a Student Leader, check out our applications page for more information.