Check out this blog post written by Student Leader, James Hallworth, about running an English in Phayao Province in Thailand. We encourage volunteers to assist in running one camp as part of their project whether that is for students or for teachers, here James talks about running a camp for over 180 teachers! 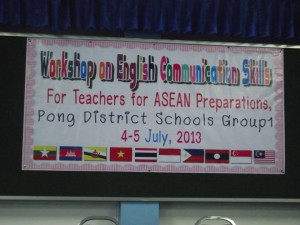 During your project, you might be asked to run or at least assist in the running of a Teaching Camp. These are very common in Thailand. Many teachers from an area meet for a day, or perhaps on two days to practice their English together. Unsurprisingly, if you’re around at a time that one is happening, the Teachers will be desperate to get you involved!

They can be loads of fun, it’s also nice to have a change from teaching students every day. From my experience, the camps can vary enormously in size, organisation and length. If you are asked to do one, then say yes! It is so rewarding to work with teachers as well as students.

If you can give a teacher some more confidence with using English, they will be less likely to use Thai when teaching English. If you give them some examples of interesting ways to learn English, then they will be more likely to make their lessons more engaging for the pupils. The impact of this will last for years after you have left – so it’s well worth doing!

A few of us recently helped out at a Camp that hosted 180 Teachers over a course of two days, so I’ll list a few of the things we did to give you an idea of what you could do!

So, you can see it’s quite easy and loads of fun. The Teachers are desperate to speak with native English speakers and to practise so they all get really involved with the work. Also, the more speaking you can get them doing the better!

Other ideas we had were…

You can tailor most of this to any group size, ability or set up of the room. Good luck! 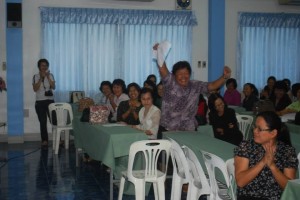 Teacher who won a prize at camp!